Within Me Without Me 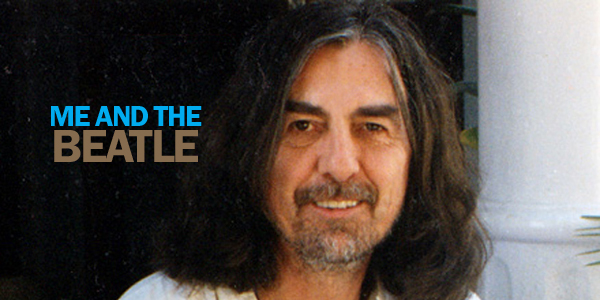 One Friday night, on the way out of George Harrison’s Friar Park estate, I was sitting in my car waiting for the back gate to open. It was 11pm but I was in no particular hurry.

Wow! This is going to blow Dad’s mind! I smiled.

The afternoon had bloomed into a wonderfully glorious evening—the antithesis of my previous, first, much shorter visit. What a disaster that had been. I could laugh about that now.

During my first visit, after we had been introduced and George began talking to me, the significance of meeting a Beatle started to overwhelm my nervous system. Clips of news reels and flashbacks, stored in my memory of the Beatles, from Ed Sullivan to Abbey Road, scenes from their movies, including Yellow Submarine, and then events associated with All Things Must Pass and Living in the Material World, played in the multiplex corners of my mind until an inner voice, within me and without me, interrupted and announced, “George Harrison is speaking to you and you can’t hear him.”

I freaked out. I realized I didn’t have the slightest idea what topic George was talking about, and now his lips were moving, in my direction, though I couldn’t detect any sound coming from them.

Then the inner voice warned, “You can’t hear him and you probably can’t talk to him either.”

My vision was ok, however, I could still see, and what I was looking at was George pausing in his conversation for me to reply. With my mouth gaped open, mummified tongue glued to the roof, I willed myself to speak and choked on a brief series of snorts and grunts that were so obviously unrelated, so remarkably inarticulate, and so comically unintelligible, I expected George, Olivia, his wife, and Dhani, his son, to laugh out loud. Surprisingly, they kept straight faces.

George got bored rather quickly and politely excused himself. Watching him leave caused my body to enter a form of hypovolemic shock. While Olivia assisted me down, past the stone gargoyles smirking on the stairs, I panicked and snorted intermittent noises that were intended to be apologies—the best I could do in order to try and salvage this colossal disaster.

“Don’t worry,” Olivia said, escorting me out, “George is used to it.”

“Yes. Many times,” she replied. “The first meeting is like that for a lot of fans. It’ll be better and you’ll be more comfortable when you return next time.”

“I promise,” she said, smiling, closing the door.

I knew she was just being kind. There would never be a next time. Not after a performance like that.

Incredibly, there came calling a next time! Olivia, indeed, knew what she was talking about. I was relatively composed during this second visit. It had been wonderful too. Better than I could have expected.

The gate had yet to make any movement in its long wide swing to open and usher me out of Crackerbox Palace. I really didn’t care. I was perfectly content, waiting in the dark, basking in the evening’s great victory. One special moment, I smiled when I thought of it, about two hours into the visit, when George had already had his fill of technology for the day and had escaped through a tapestry curtain on the far side of the room, son Dhani, opened a file on the Mac that displayed an image of the Magical Mystery Tour album cover. I got as far as, “I remember …” and Dhani quickly clicked and closed the file—no comment. I got the feeling he was testing my reaction to see if I was one of those Beatle freaks. It didn’t take him long to find out.

Dhani opened another file of a photo of his art student friends that he had twirled, pontillized, craquelured, and Photoshop only knows what else.  It was a striking image. He wanted to print it on the new Tektronix dye sublimation printer I had set up earlier. What he had yet to learn, however, is that what you can render on a monitor is not necessarily what you get when the print hits the paper. Monitors and printers exist in two distinctly different image rendering spaces. And from what I could tell looking at his extraordinary image, it was likely too complex to be rendered true by the new Tektronix, or any other printer I was acquainted with for that matter.

Dhani sent the file to print and the Tektronix engine immediately started interpreting and printing—a sure sign the Tektronix didn’t even bother with a process pass—a blank sheet of dye-sub paper would be delivered in the tray for Dhani’s waiting hands guaranteed. As I braced for his disappointment and prepared to explain monitor and printer dynamics and their limitations, he held the paper up and exclaimed, “Wow! This is going to blow Dad’s mind!” 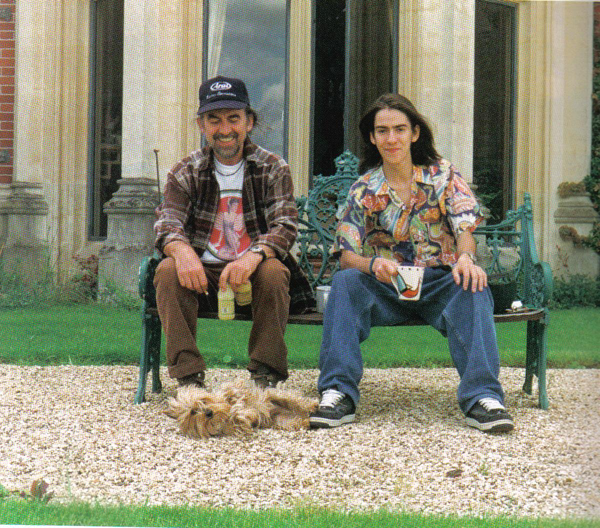 I couldn’t believe it! It was a perfect representation of Dhani’s artwork!

Naturally, I shared in the glory. Well, come on, I recommended the Tektronix, didn’t I?—over the advice of another, more local, Apple distributor I might add—whose representative btw had argued that the Tektronix I was recommending was way overkill and six times the cost of the color printer that he was flogging—insinuating, from what I surmised, that I was taking the Harrisons for a ticket to ride.

Watching Dhani hold his artwork high above his head, both of us in victory formation, then him dashing through the mystical curtain to show it to George, was singularly the most satisfying moment in my career of schlepping computers and software across two continents.

Wow! This is going to blow Dad’s mind! Indeed.

What I did not know, however, was that very soon, within the hour, the absolute, hands-down, unimaginable, worst moment of my working life was sure to follow.

Part two of this story continues at Went To A Garden Party.

5 thoughts on “Within Me Without Me”