My Confirmation From Springsteen 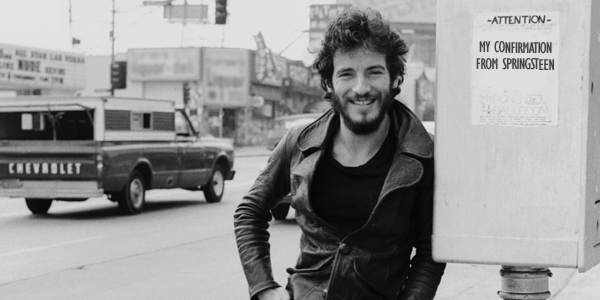 I’m late for my interview with Bruce Springsteen. I crashed early in the morning, overslept and now I’m stuck in a meeting with my Econ professor. His closet-sized office smells like a Swisher Sweets cigar bong. He’s telling me college is not for everyone. My God, he’s so old and boring. Just like in class. Is he like this all the time? This is your fault. Waking up late. You knew you had to be here on time to make the Springsteen interview. You got to get out of here. Now.

Acting like I’m interested in Prof’s sermon is a bummer. I try and stifle a yawn but can’t keep my eyes from watering. I look up to see if he notices. He’s out of it. Just rambling on. There has to be a way to get him to shut down. I’m going to freak out, you know? I feel I’m about to lose it, like I’m about to stand up and rip my shirt off and demand that he gets to the point, and then he finally stops, and asks, “Do you really think college . . .  is for you, Wayne?”

I stand at attention. “Yes sir, yes sir, I really do.”

Prof slumps in the chair behind his desk, disappointed with my reply. I explain that I’m no longer working nights at Dzik’s Foosball, have only one job now, “plus the  radio show, only once a week,” I say. “School is going to be my main focus.” I stand up and apologize for falling asleep in his class again. “That was the last time,” I promise. He’s giving me the doubtful eye. Backing up slowly toward the door, smiling and nodding, I say, “Thank you . . . thank you very much . . . Professor Wright.” I give him a deluxe copacetic smile, and without the slightest opportunity for him to accept or reject my apology, I back right out of his office, at a reasonably polite pace, into the hallway, a couple of steps left, out of his sight, then haul ass to my car.

This is what it feels like to drown. Behind in classes with school work piled up out the ying yang; my business falling apart, ripped off last week in a deal that I had spent beaucoup time putting together, even recruiting other investors to get in on; my dying relationship with Ariel, who, after living with me for three years, had had enough and gave me an ultimatum, “I want you out!”—more than anything it was her certainty that hurt me—moving out caused no little hassle either, having to move into a room in the rented house of my co-producer, Ray, and his annoyed roommate.

Everything’s failing. The only thing I’m giving quality attention to is the radio show. But even that, Black Oak Arkansas and Jimmy Buffet called last week and I had to pass—didn’t have time.

But I’m not about to miss my interview with Bruce Springsteen. No way.

A few months ago Bruce made both covers of Time and Newsweek as the next big thing in rock and roll. He’s in town kicking off the first show of the second leg of his “Born To Run” tour—his band is calling it The Chicken Scratch Tour, because that’s what the lines on the map look like that connect their venues across the South. The title song from Bruce’s album, “Born To Run,” is becoming like an anthem to many—it has a particularly deep, personal meaning to me, you know? 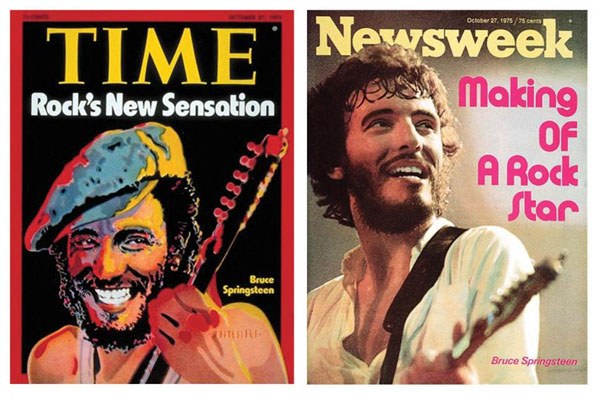 Running late, I’m bookin’ it down Barnwell Street. Custard Pie from Physical Graffiti rattles the inside doors of my VW. Wait . . . I’ll have to come back to campus at three for my anthropology class. Taking a left on Taylor Street, I remember I’m supposed to drop a dime off at Rick’s as soon as poss. I can get to it after I deliver the tape to the studio. In moving traffic, I hit the brakes in front of the Township Auditorium. “Wow. There’s Bruce Springsteen.” He’s alone, coming out the side door on Henderson Street. I pull up and over at the curb, fling open the car door, and call out, “Bruce!” He looks up, puzzled. I shout, “Wayne Cooper! Here for the radio interview!”

He walks over—jeans cuffed—he’s light and loose—there’s no heaviness about him. “I was just going for a walk,” he says. He doesn’t mention anything about me being late. Maybe Columbia Records didn’t tell him the time and he’s not aware I’m late—I keep my mouth shut. In the back seat, I reach for my Uher recorder and remember the batteries are drained. Great. I stop and think for a moment. You can record him tonight, backstage after the show, or later at the hotel.

Bruce has already crossed Henderson and is heading west on Taylor toward downtown when I catch up with him. “Who you with again?” he asks.

I tell him about the show and explain the format, tell him how we’ll edit quotes recorded from the interview and mix them with his music in the studio. He doesn’t ask where my recorder is.

He has an underbite like I do. And a slight gap in his front teeth, same as me. He isn’t tall. Maybe a couple inches taller. He’s got better hair. I wonder if his waves are natural. My beard is fuller than his, which gives me satisfaction. He’s a bit older. Walking with him I feel like a freshman walking with one of the cool seniors in high school.

I point across the street to Taylor Street Pharmacy. “That’s where we used to go for ether.” Bruce looks puzzled. “To cop a cheap buzz,” I explain. He looks at me funny. “Back in high school,” I add, just to make sure he understands that I’m no longer associated with that kind of kid stuff.

Just ahead, a canary-yellow Nova does a U-turn at Bull Street. It drives back up the other side of Taylor and a freak hanging outside the driver’s window blows his horn and yells, “Bruuuuce!”

I ask him how the tour’s going. Then I hone in on “Born To Run,” the song. Is it autobiographical?

“It’s about a guy and a girl who just want to run. Who want to keep on running. They’re looking for something . . .  a connection.”

“Exactly how I feel,” I say. “I have this feeling inside—to just go—get away, you know? I’ve had it for a long time.”

“You get along with your dad?” he asks. I’m not sure why he’s asking me that. “When I was home, mine was all over me. Bothering me about being somebody,” he adds without a hint of bitterness.

“Yeah. That’s my dad too!” I lie.  I just want Bruce and me to have something else in common. I feel really at ease with him. “I bet your dad doesn’t bother you about that anymore,” I say.

He has a great smile that makes me feel comfortable.

I open up: “The other night, a couple months ago, weird, about three in the morning, you’re going to think I’m insane, my girl friend’s asleep in bed, I walked out of our apartment, totally nude, not a stitch, down the steps, and lay down on the sidewalk, staring up at the stars. I’m laying on the sidewalk without any clothes on, watching the stars and wondering about all the places . . . out there in the world . . . That night I had this powerful urge . . . to leave everything . . . and run, you know?”

Bruce doesn’t say anything. I feel really really stupid. Why did you have to share the part about being butt-naked?  He probably thinks you have a mental problem. You probably do. What’s wrong with you? Why do you always say the stupidest things in these interviews? 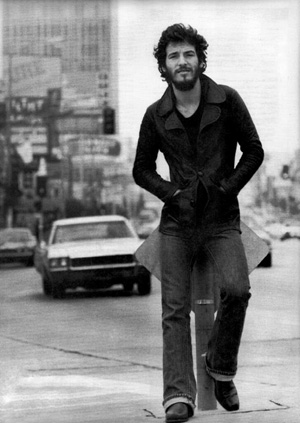 “You wanting to run with you and your girlfriend?” Bruce asks.

His question catches me off guard. I don’t really feel that way about her anymore. “I don’t know. We’re not doing so well lately,” I reply.

“I lived with someone for a couple of years. I figured out, for me, I wasn’t the marrying type,” he said.

A memory comes to mind—I want to share it but I’m not sure—not after my stupid butt-naked story. It’s just that Bruce is so easy for me to talk to—he really listens—it’s like he’s an old friend, more than a friend, it’s like he’s someone sent by God to help me—with this angst wrenching inside me—I feel like this is an important moment in my life, you know? I decide to share the memory anyway.

“There was this one weekend,” I begin. “Right after Ariel and I moved in together. We took off for the mountains. Nothing planned. We brought Little Richard along and a sleeping bag. Little Richard was a bottle of wild rose we kept referring to as our traveling companion. We checked into a camp site—spread out our sleeping bag under the starlight. That night, man, was so clear. I remember feeling like it would be just fine if we just left everything—her job, my school—just keep on trucking the next day and all the days after.”

“Sounds like you were born to run,” Bruce says.

I look over at him to see if he’s joking. He’s looking straight ahead. Man, there’s nothing better for me at that moment—hearing that—from Bruce Springsteen! It’s like the ultimate confirmation, you know?

We’re coming up on Main Street and a car pulls alongside with some Bruce people—they’re heading back to the hotel for a phone call from New York. Bruce asks if they can drop me off at my car back at the Township. I don’t want to be a bother. Besides, right now, walking and thinking feels good.

On the way back to my car, I recall something from that trip to the Smokies with Ariel. The mountain air had turned chilly. Wrapped up inside our sleeping bag, we had emptied Little Richard into ourselves and were sharing a joint—her head lying on my chest—my fingers stroking the nape of her neck, then slowly down inside the back of her top and she said, “Wait.”

“Your heart. It’s saying something.”

38 thoughts on “My Confirmation From Springsteen”