My Midnight With Zappa 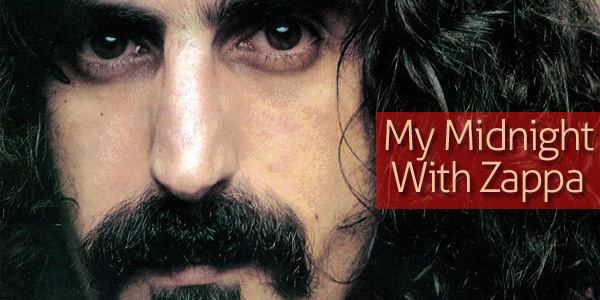 “I don’t give a shit about the Doobie Brothers. You want to see Frank or not?” Marty replied. I was shaking on the other end of the phone—I had dropped The Doobies name and failed to impress Marty Perellis, Frank Zappa’s road manager, with my interview schedule for that week,

I did the Doobies interview during breakfast at their hotel on the Saturday morning after their Friday night show at the Carolina Coliseum in Columbia, SC— and later that evening I headed down to Atlanta to meet and interview Frank Zappa who was appearing at the Atlanta Municipal Auditorium.

FZ never sniffed the commercial success that the Doobies were enjoying but he was an original legend. He was there from the beginning of the freak movement. He had established himself in the New York, Los Angeles and European scenes years before the Doobies took a stage.

FZ was widely considered by many serious musicians a musical genius. Elite orchestras like the London and Royal Philharmonic Orchestras had performed his original classical compositions.  He was one of the very few rock musicians that could compose music on staff notation and tablature. As a composer, he was as prolific as Mozart.

And like Mozart, FZ was bawdy, but much more so; where Mozart mostly restricted his tame-by-comparison ribaldry to friends and family away from the stage, FZ, along with talent he recruited, performed the most salacious musical sketches and theatrics about sexual fetishes and kinky relationships, live on stage for the whole world to see and also recorded the performances on his albums with posterity for all.

No one in the performing arts was as irreverent as Frank Zappa. He was very hard on organized religion especially the religion he grew up on: Catholicism. Patriotism. The government. Corporations. Commercialism. The phoniness surrounding the culture of flower power. No institution or issue was sacrosanct to him.

Frank was also not in the least impressed with big time rock or movie stars; he often made fun of them and ridiculed them and their star status in the lyrics of his music, including an entire album he wrote parodying the Beatles in the brilliant and biting and critically acclaimed, “We’re Only In It For The Money.”

There was no better role model than Frank Zappa for teen boys with naughty irreverence working in their hearts. Our senior year in high school, my best friend, Robert Evans, and i performed entire evenings of bits from FZ albums like “Live at Fillmore East,” “Just Another Band From L.A.,” and the awesome “200 Motels.” We knew all the lyrics, the timing, all of it. We probably watched every performance of “200 Motels” ever featured at the downtown Midnight Matinee. Zappa was a cult with us – and in public, to our delight and for great laughs, his lyrics were a secret code we often used around people who didn’t have a clue.

For me, however, the most daunting prospect about engaging Frank Zappa was his merciless reputation for slaughtering those of the media who dared to venture the abattoirs, camouflaged as dressing rooms and hotel suites, reserved to conduct the interviews he generally despised or was ambivalent about.

That was the backdrop for my meeting with Frank Zappa. To say I was intimidated immaculate is an understatement.

During the drive to Atlanta, my thoughts vacillated between the problems I was having in my marital relationship and what awesome experiences lay ahead for me with FZ. Fantasy scenes of Frank and me  flushed my imagination—both of us holding our sides, laughing uncontrollably, as we recreate bits from “200 Motels.” Frank, of course, commenting on how surprised he is that i know the material so perfectly.

I arrived at the Auditorium about a quarter of the way through the show. A lady at the will call window told me a second show at midnight had been added. I watched the performance from the side of the stage until I was directed to wait inside a small holding area where sat several media types, including an Atlanta print journalist and a national radio guy who represented a syndicate that did two minute spots with celebrities and a sponsor. We sat quietly, mostly, our hands on our laps, like well-behaved audition hopefuls.

Enter Marty Perellis. “Wayne Cooper?” he asked looking around the room with strictly business eyes. He plucked me from the group and told the others waiting, without the slightest hint of an apology, that there would be no interview for them tonight. I felt their jealous eyes all over my body and i wondered—perhaps my Doobie name-dropping schtick had been more effective than i thought after all.

Walking down the hall with Marty felt more like a trip to the principal’s office than to a meeting with an authentic rock god. A very tall, giant-like, bare-armed, shaved bald black man stood guard outside the door of FZ’s dressing room. He literally snarled at me when Marty told him to let me in.

I entered and immediately saw Frank. He was sitting cross-legged, seashell-colored pants, bright socks inside nondescript shoes, shirtless, holding a cigarette with one hand and a cup of coffee in the other. A young lady, about my age, early 20s, was posing on a stool facing him. The large smoky and noisy room was busy with people. A draft of patchouli followed some woman who brushed up against me. Out the corner of my eye I recognized Napolean Brock Murphy and Roy Estrada but i was hypnotized on FZ—it’s generally considered that FZ’s most iconic physical feature is his magnificent black imperial mustache and insurgent goatee but in person it’s his dark penetrating eyes.

He saw me. I moved my legs toward his direction, but teetered momentarily, as the extra socks i had rolled up and stuffed inside my shoes under each foot shifted—accessories that i often deployed to give me a little extra lift whenever i felt insecure or faced a challenging situation like meeting a legend, for example.

I eagerly extended my hand, “Wayne Cooper” I said introducing myself, shocked, grasping what felt like a claw. FZ had contorted his hand into an irregular shape. My hand awkwardly tried to grip the thing for a shake and before it could do, he withdrew it. This confused me greatly. Why’d he do that? To avoid some disease? Was it a secret signal? While i was trying to intellectually process that transaction, the girl on the stool asked FZ, “Can I take my shirt off too?”

Willow removed her top and the state of her bare breasts was all the explanation required as to why she was proud to do so.

I fumbled around with a wall outlet and the plug of my Uher recorder until i finally got a connection and to get the thing on the ground running i launched into the subject of “200 Motels.”

“Yeah, what about it?” Frank replied, rolling eyes portending boredom.

With that short retort from Frank, “Yeah, what about it?” and its accompanying tone, he successfully communicated that:

The thing was: i wasn’t qualified to talk about the areas that FZ really was interested in discussing. The technical aspects of his compositions. Subjects like atonal sparse modernism, understanding the concept continua of his music. His ambition to perform in Sofia, Bulgaria and the terms and conditions required at international customs to stage a behind the iron curtain performance. I had falsely assumed that my intimate acquaintance with “200 Motels” was all that was needed to get this interview singing.

Frank recognized my predicament but wasn’t about to come to my emotional rescue like the ever-gracious Rod Stewart had when he bailed me out.

FZ dragged on his cigarette, whorls of smoke orbited his head as he held me under observation like a rather uninteresting lab experiment. I finally mustered an old standby: “What do you draw on when you write your songs?”

“People I meet. Stuff I notice.” His eyes drifted slowly down to my shoes. I followed his lead and noticed that an odd bulge had developed on the left side of my right shoe—the sock i had strategically placed underfoot to give me a couple of inches of pump had shifted badly. (Years later i wondered whether i had been the inspiration for his “Sinister Shoes.”)

Another session of awkward silence ensued.

Frank got up to pour himself another cup of coffee. I pointed to a sink hanging from a nearby wall and said, “Maybe if you turn on the water, that’ll help me get some questions flowing.”

He laughed. “I’m going to use that one.” And he laughed again.

Emboldened, I asked him about “Carolina Hardcore Ecstasy” a song he had written for his current album “Bongo Fury.”

Frank became animated. He explained that the song was about a girl with a peculiar fetish, “ . . . who liked to be stepped on with large shoes . . . ”

Willow or I must have reacted because Frank stopped and said, “A little weird but I’ve heard of worse . . .”

“Worse?” I asked, calling him out for making a value judgement on the girl’s fetish.

I was beginning to gain altitude.

While FZ described with relish, considerable amusement, and exquisite detail, the story of the  girl who liked to be stepped on with 14DDD sized plastic shoes, I remembered reading in a Rolling Stone interview where FZ had lamented that no one ever asked him about his guitar playing. I opened the throttle: informing him that I owned a Gibson SG, very similar to the model he was playing, I made a comment about his unique playing style as one of the best guitarists in rock.

He was visibly pleased. To my delight, he actually took up his guitar and plugged into a small amp and performed solos for fifteen or twenty minutes. It really looked like he enjoyed watching me agog—me watching him agape. It was hard to believe that Frank Zappa was playing solos with his guitar just for me and my little recorder.

“You have any more questions?” he asked.

I took a breath. “Who do you see when you look out into the audience?”

“Unless the lights are up, it’s dark and I don’t see anyone. But I know they’re out there—I can hear ’em breathing.”

“That’s not what I meant. Do you think fans in your audience get what you’re doing?”

“Probably not most of them. Most of them come to hear the provocative material and to see what crazy stuff we do on stage. A few come to hear the musical arrangements. The classical stuff. Very few get the whole deal. But they might get it one day,” he said smiling.

I packed up my recorder and got to the door when Frank stopped me, calling out from across the room, “Wayne! You staying for the second show?”

“Is it like the first show?” I stupidly asked.

Frank walked over and discreetly inquired whether i would do him a favor—keep Willow company for him until the end of the show. I figured it would be around 3am before the second show finished; but I agreed.

The thing is: Frank never showed after that midnight performance. I think he planned it that way. I followed Willow over to her apartment in Sandy Springs and we stayed up until sunrise—talking about Frank and my marital complications, which turned out to be rather helpful for me.

P.S. Dweezil Zappa, Frank’s talented son, says if he had to recommend one Frank Zappa album to best introduce a new fan to what Frank’s music was all about, he’d go with “Apostrophe.”

38 thoughts on “My Midnight With Zappa”