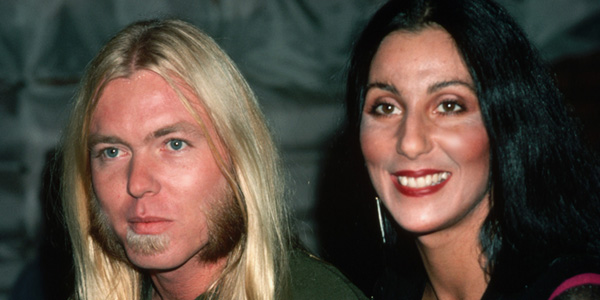 Cher is dying and telling all—according to the National Enquirer.

I once bumped into Cher backstage at an Allman Brothers concert. She was alone, leaning against a wall in a hallway—Gregg and the Brothers were out front finishing their “Les Brers In A Minor” encore—while me and the co-creator of the radio show I worked for were slinking, unsupervised, in the “green room,” where we secretly and shamelessly rifled, from a long buffet-type table, copious quantities of munchie cold cuts into our pockets and salami holes.

The Enquirer reports that Cher is going to set the record straight with a memoir that will dish the sensational details of her relationships with the men in her life, including the tempestuous passion she shared with Gregg Allman. At the time of my own encounter with Cher, she had married Gregg seven months earlier in a spontaneous bolt to Las Vegas, had filed for divorce a few days later, reconciled with him, was currently pregnant with their baby Elijah Blue, and had recently gotten back together with Sonny to do another Sonny & Cher series on CBS which was scheduled to debut in about a week. She had a lot going on—but you couldn’t tell it by the way her body was speaking that night: focused—composed—very much in control.

I almost didn’t recognize her. She wasn’t as tall as I thought she would be nor was she sparkling in a Bob Mackie spectacular like the images you always saw of her in the press and on TV. Dressed modestly, blue jeans and plain dark hues, she looked like she could have come straight off a photoshoot at the Allman Brothers’ Idlewild South Farm in Juliette, Georgia. What she didn’t look capable of, however, was conveying the razor attitude she made famous in the original Sonny and Cher show, the ambivalent put-downs that queued the laugh track whenever she cut Sonny off at the knees. I saw a vulnerability about her that evening—she appeared lovestruck as well—I too was struck, with her natural beauty.

I admired and respected Gregg but not as a partner for Cher. Sonny and Cher had actually split up before Gregg came into her life, but to the general public it appeared as if she had dumped Sonny for “Gregory,” as Cher liked to call him. For several reasons, and for quite some time, I had considered Sonny & Cher’s public marriage physically and spiritually analogous to my own increasingly melancholy relationship. I was more Sonny—dark and short. Gregg was everything I was not—tall—and his hair . . . when he rushed into the green room after the show, his hair streamed behind him like the long bright golden trail from a comet streaking through stars. In its wake, four lovely women seated on stools became extraordinarily animated. I swear I’ve never seen flesh react like that by the presence of another human. If Gregg noticed the gawping ladies hyperventilating he didn’t show it. He grabbed some stuff from a locker and left—all in one motion. I waited about a minute and poked my head out into the hall and Cher was gone too.

The National Enquirer is notorious for lacking journalistic integrity; I really really hope these reports of Cher’s imminent death are false rumors.

From Cher’s solo TV show before they publicly became a couple. Gregg sings Don’t Mess Up A Good Thing and Midnight Rider while Cher and her dancers perform.