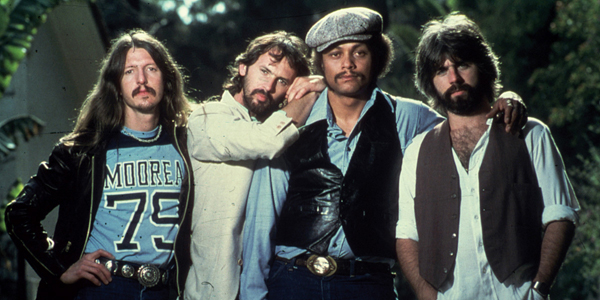 I showed up late at the hotel for breakfast with the Doobie Brothers. Over eggs and bacon, a Doobie road manager suggested to a Rolling Stone magazine journalist that he go with Pat Simmons and Jeff “Skunk” Baxter up to a room for an interview—then the manager gave me a ticket to ride an elevator with Tiran Porter and a Steely Dan sideman filling in for Tom Johnston, who was MIA, convalescing back in California with a bleeding ulcer.

I wanted to protest but didn’t want Tiran to think it wasn’t cool to interview him—because it was—it was just that I really wanted to interview Pat too. I looked to Pat for help and he held out his arms and pulled a face as if to say it wasn’t his fault, he couldn’t help it, it was out of his hands.

Man, I had a real attitude during that elevator ride. In the room, during the interview, I couldn’t have been more of a poophead to the new guy. But I mean, really, who was this guy?

He was Michael McDonald, that’s who.

The singer, songwriter, and keyboardist that would go on to take the Doobies in a new direction—writing and performing some of the band’s most memorable hits—”Takin It To The Streets”, “It Keeps You Runnin'”, “Minute by Minute”, “What A Fool Believes.”

The guy nominated this month to be inducted into the Songwriter’s Hall of Fame.

Congratulations Mike—sorry I was such a butt.

One thought on “My Doobie Brothers Bummer”