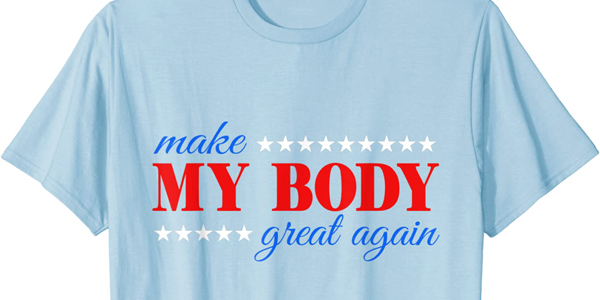 “I can’t believe you let yourself go like you have.” Not the last thing she said to me but in the Top 5. (The last thing I remember she said to me was one night during her final week—she sat up in bed and said, “I can’t do this”—in reference to her time of dying)

Did you know your ass can get so big you can’t even wipe it?—not standing up—not to complete satisfaction. It’s true. That was a revelation. It got bad when the pandemic broke. At first I figured, ‘we’re all going to die anyway’ why not get carried out comforted with a tub of cookies and cream from my cold dead hands? I quickly broke my record weight. Jumping up 10 pounds in the first week after putting on the mask. Wiping my ass to satisfaction wasn’t the only thing—there were a slew of reasons why I decided to make my body great again. One day I was walking in downtown Wilmington and had to stop and catch my breath. Someone had to go and bring my car to me. Humbling that.

I’m ashamed to admit publicly how much weight I’ve lost. Maybe too much. A couple weeks ago leaving Harris Teeter, the automatic door wouldn’t open for me. Probably a glitch but then someone else came along and it opened for us. Last week, getting vitamin D in the back garden, Spotify plugs in my ears, eyes closed, I sensed a cloud come over me. I opened my eyes and, let’s just say, someone in the neighborhood (guaranteed, per capita, Weirdest. Neighborhood. Ever.) was standing next to my lounge chair pointing their phone in the direction of my torso taking my picture. They were genuinely intrigued and made a comment that it was unusual to see a rib cage and protruding sternum like mine with someone my age. Not an observation made with any particular admiration but rather more like marvel in a carnival freak show kind of way. I’ve been monitoring Facebook and Instagram for the photo to premiere but nothing has played that I can find. (If you come across an image of an old man’s protruding sternum and rib cage do PM me please)

When friends I haven’t seen for awhile see me, they exclaim. My primary care doctor looked alarmed and asked if I lost the weight voluntarily. Everyone immediately wants to know how I did it. Well, the how happened one night on the phone with my daughter. I was complaining about my weight (a favorite whining point that is boring as hell for others to listen to). She suggested I keep a food diary. I found out through the Mayo Clinic the *minimum* recommended caloric intake for someone like me was 1500 calories a day. I followed the science. That was last July. I’m still on it. In between, my son, the strength and conditioning coach, set me up in a routine that’s made me more mobile and limber, and the thing just took off.

My body great again and vaccinated immaculate, makes it good to survive a pandemic.