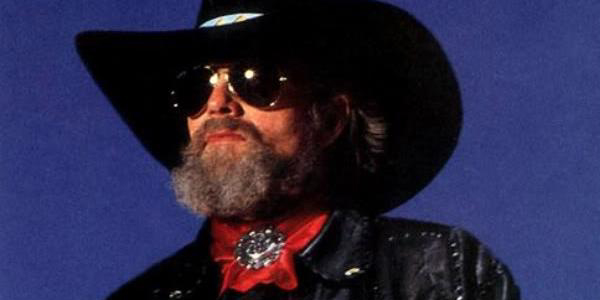 The first time I interviewed Charlie Daniels was my first gig as an interviewer. I found him behind the stage sipping whiskey and smoking in a trailer at an outdoor festival from Hell outside Rockingham, North Carolina.

Rain fell hard and arcs of electricity popped off a guitar during the set of the aptly-named Wet Willie—sending the band back to the trailer for cover. Puddles formed into pools on the stage and everything dripped. A drunken waterboarded audience grew angry during the delay. Toy Caldwell of the Marshall Tucker Band braved a stage mic to quell the rowdy crowd and explained the dangers of mixing electricity with H2O—Toy promised a rain check for a future date. The mob threw bottles and cans at him—sending a pissed-off Toy back to the bus. Bad words and ugliness commenced. Fights broke out. Equipment destroyed. A murder was committed.

Charlie said no way in hell was he going on, risking electrocution, and becoming “some martyr to music.”

While roadies and managers and talent panicked to and fro, Charlie sat in a wooden chair and calmly held court in the trailer, expounding on subjects with a knowledge that betrayed his image. It was the first time I had heard the name “Willie Nelson”—Charlie was glad Willie was finally getting some attention. Charlie said he didn’t consider his music country—his music was more rock.

By the time the Urban Cowboy craze hit, he was set down firmly on a country road. He was inducted into the Grand Ole Opry and a year later inducted into the Musicians Hall of Fame and Museum in Nashville. Proclaimed a “pioneer in introducing southern rock sounds into mainstream country music,” he got inducted into the Country Music Hall of Fame. Charlie was also a gospel singer and released a few gospel records. Rock Hall of Fame induction pending …

Over the years Charlie used his platform to promote his brand of political activism—a bit too far on the right on some issues for my taste—but one thing you could never question was his love for his country. God, he loved America. If you read his love letter below out loud, you can listen to his heart yearn for America.

Have you ever spent the late afternoon,
Watching the purple shadows deepen in the Arizona desert?
Or seen a herd of Elk plow their way
Through waist deep snow on a cold Colorado dawn?
Did you ever see the sun go down in Hawaii
Or seen the stormy waves break over the rockbound coast of Maine
Or have you ever see an eagle fly up out of the mists of Alaska
Or a big October moon hanging full over the still Dakota badlands?

Have you ever tasted the gumbo in New Orleans, barbecue in Carolina
Or the chicken wings in Buffalo?
Have you ever had Brunswick stew in Macon, or cornbread in Birmingham?
Or briskets slow cook over hill country mesquite wood?

Did you ever drink the water from a gurgling branch in Utah,
Or stand on the mountain above El Paso Del Norte
And see the lights twinkling clear over into Mexico
Did you ever jingle horses in the pre-dawn stillness of a perfect Texas day
And watch their shod hooves kicking up sparks on the volcanic rock?

Or tended a trotline on a foggy Carolina morning,
Or heard the distant love song of a lovesick whippoorwill
On a pristine Tennessee late night?
Have you seen the faces on Mount Rushmore or stood at the Vietnam monument?

Have you ever crossed the mighty Mississippi,
Or been to the Daddy of ‘Em All in Cheyenne, Wyoming
Or seen the mighty Vols run out on the football field on a chilly autumn afternoon?

Did you ever see the Chicago skyline from Lakeshore Drive at night
Or the New England foliage in the fall,
Or the summer beauty of the Shenandoah Valley,
Or Indiana covered with new snow?

Did you ever seen a herd of wild horses running free
Across the empty spaces of Nevada?
Or caught a walleyed pike out of a cold Wisconsin stream,
Or marveled at the tall ships docked in the harbor at Baltimore?

Did you ever see the early morning dew sparkling on the bluegrass,
Or the wind stir the wheat fields on a hot Kansas afternoon
Or driven the lonely stretches of old Route 66
Have you ever heard the church bells peal their call to worship
On an early Sunday, in some small town in the Deep South?

This then is America!
The land God blesses with everything
And no Eiffel Tower: no Taj Mahal,
No Alps, No Andes
No native hut, nor Royal Palace –
Can rival her awesome beauty,
Her diverse population, her monolithic majesty.
America the Free
America the mighty
America the beautiful

I pledge allegiance to the flag of the United States of America
And to the republic for which it stands
One nation under God, indivisible
with liberty and justice for all.

What do you think?

Pray for our troops, our police and for the peace of Jersualem.